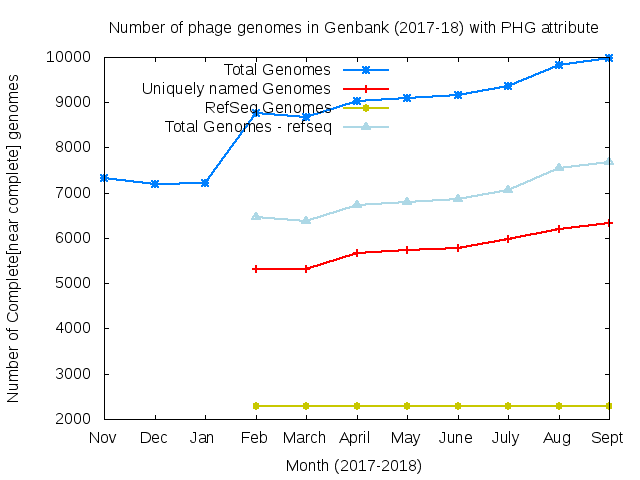 In filtering for complete phage genomes, it became clear that the phages with the same name will have multiple accession numbers, for multiple reasons. The simplest is the presence of a RefSeq and original accession number.  eg Synechococcus phage S-CAM9  RefSeq (NC_031922) and the original  (KU686206). So while it has a unique accession it, it is a duplication of an existing genome.  So we were counting these phages twice, we can easily remove these from the total. This reduces the total by ~ 2300, leaving ~ 7700 genomes, as seen above.

But this doesn’t mean the all these remaining genomes are unique. Again using the example of Synechococcus phage S-CAM9 there are three accessions numbers  KU686206, KU686205, KU686204 that are all derivates of S-CAM9, with each being a different isolate [see the paper]. The filtering we used was pulling out the “phage name”, but not also the “isolate number” [something we need to fix in our script]. Given it is not possible to determine from the Genbank file descriptions how similar phages isolates are- which can vary from 1 SNP to multiple gene deletions. We grouped all phage with identical “phage names” into a single entity – on the basis they are very similar. This data is also plotted as ” uniquely named  phage”

So what does this mean?

Well, the number of unique phage genomes in GenBank [not 100% identical]  is probably somewhere between ~6200 and 7700. A number of isolates of the same genome have been sequenced multiple times.

The number of phages with RefSeq accessions has barely increased in the last 6 months. However, the number of  “total genomes” and “Uniquely named phages” is increasing month on month. Therefore, using only phage genomes from RefSeq is likely to vastly under-represent the diversity of phages if constructing a phage database.

Below are  files for all phage genomes, and RefSeq only genomes along with premade MASH database

Files can be downloaded below