Antibiotic resistance genes have been found in the viral fraction from a number of different environments including the murine gut (Modi et al. 2013), activated sludge (Parsley et al. 2010) and feaces from farm animals (Colomer-Lluch et al. 2011). Building on this previous research Slaweks PhD project will look at the role of bacteriophages as a reservoir of antibiotic resistance genes in the marine environment. This will involve metagenomics and culture bases studies developing Vibrio spp as a model phage-host system. 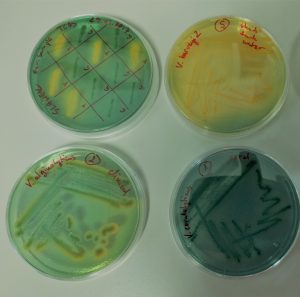 During his project Slawek has isolated a collection of phages that infected a broad range of Vibrio spp. These model systems are now being studied to further understand the role of vibriophages in horizontal gene transfer , in particular antibiotic resistance genes.

In addition to isolation of vibriophages, we have have been predicting the presence of prophages in Vibrio genomes. To date we have predictions for > 9000 vibrio genomes, with > 10000 prophage like elements. We have found the presence of antibiotic resistance genes on these prophages. An example is below of cat gene on a predicted prophage